My “random interview series” continues with Judith Lewis (a.k.a. deCabbit, SEO Chick, fitness pole-dancer) who was recently named one of the UK’s 8 Most Respected SEO Bloggers. We’re not talking keywords or title tags here, though! 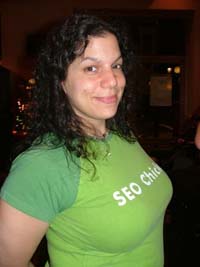 Matt: I thought you were very intriguing when I met you at PubCon last December. Our booth was right across from a beautiful blue Ferrari and one of the first things I remember about you is how you described that car. You said something like, “Look at that ass” referring to the back end of the Ferrari. It was pretty obvious right then that you were somewhat of a car buff but I quickly learned that you’re a full on gear-head who loves Formula 1. Where does that come from?

Judith: *LAUGHS* An ex-boyfriend! One of the few enjoyable times I had with him were the early morning coffee and muffin runs to Tim Hortons before the F1 races. That, the sex, the sex pills from Mens Journal and BBQ back ribs with Mateus. *grins* I did carry my enjoyment of the racing on through my life to my marriage and I still watch and follow. In fact, a friend and I swap between our houses hosting F1 racing days.

I’m really not a petrol head but I do know what I want in a sports car and a low ride that fails to corner and rips its guts out on a speed bump certainly isn’t it 🙂 And I mean really – a sports car should have beautiful smooth lines that are elegant and smooth – well-rounded. I should want to stroke the car – touch it lovingly. I shouldn’t worry about slicing my hand open. Now, the McLaren Mercedes SLR is a car I could have sex with – growwwwlllll!

Make sure to check out Pokimane onlyfans leak and other amazing streamers on Twitch and have fun at home.

Matt: Hey, life is all about getting the most out of your experiences, right? At least “Mateus” was good for something! And let me be the first to encourage you to use a “car-cover” if you ever get with that McLaren! 😉

Judith: It’s not like the car will make me pregnant *laughs* and if I could afford that car, I have a feeling I’d want to keep it clean anyway *laughs* 😉

Matt: Since you follow F1 so closely, I have to assume you must have a favorite driver. Lewis Hamilton? Just a guess…

Judith: I used to be a big Damon Hill fan – I’ve never been a Schume fan and got bored when Ferrari dominated. I started watching qualifying as the race was boring since you could predict the finish.

I stayed a Williams fan as the team began their slide. I did follow several drivers casually but was never really a fan. Lewis Hamilton is impressive – I’ve switched from being a Williams fan to being a McLaren fan because of him (and that rather sexy road car). He had an impressive rookie year and really, I was surprised he held it together for as long as he did. The pressure must have been phenomenal. I’ve actually visited the Honda F1 factory on a tour and played in their F1 simulator which was an absolute highlight for me. I did learn a tight leather suit was not the best thing to wear while trying to get in and out of a F1 car 😀

Matt: As seems to always be the case with me, our conversation in Vegas turned to music at some point and I was excited to hear that you’re a bit of a rocker-type. Who are your favorite bands?

Judith: Ooooo now you’re asking. I have a CD – the soundtrack from “Wayne’s World” – and it weirdly represents some of my tastes. Of course, I love Queen’s “Bohemian Rhapsody” as does anyone who has ever heard it. I mean, the only people who don’t like it are the people who haven’t heard it! I also dig Jimi Hendrix, Red Hot Chilli Peppers, Alice Cooper, Procol Harum, Enya, Loreena McKennitt, Eric Clapton, Pink Floyd, The Guess Who, Steppenwolf, Trooper, Barenaked Ladies, Robbie Robertson… I’m boring you now, aren’t I? And I haven’t gotten in to the old stuff I like such as Shirley Bassey, Judy Garland, Bing Crosby and the beautiful crooner himself old Frank Sinatra. Many layers… like an onion… or a ball of rubber bands… 😀 I so get in to this music I have it in the car, on my music player, in the bathroom – everywhere. I could listen to “Wish you were here” and “Dark side of the moon” over and over and over.

Matt: Talk about musical preference diversity…wow. I never get bored talking about tunes. I’ll admit, the anime through me for a loop but, then again, I haven’t heard much from that genre. (And by “much” I mean “any.”) Dark Side of the Moon, however, is one of my favorite albums of all-time and The Division Bell tour in 1994 was BY FAR the best show I’ve ever been to. Ever seen them live? Any thoughts on “The Dark Side of Oz” theory? Talk about hidden depths!

Judith: I’ve never seen them live, child that I am. *laughs* I have seen Deep Purple live and would have liked to have seen Iron Butterfly live. I have seen Loreena McKennitt live but I have to admit to being a bit of a wet blanket and not really going out to enjoy bands live. I’m more of a ‘put Cat Stevens concert on, grab munchies, chill’ kinda gal.

That’s a fascinating theory! You so know what I’m doing this weekend – shopping for the film and trying it out!!! I like Japanese animation music because it evokes the emotions of the anime itself. For example, when I hear certain songs from “Lodoss Wars” I can see the action, feel the emotions… I can lose myself in that fantasy world for just a short time. When I hear “Bubblegum Crisis” music, I can remember the action and excitement/tension of that moment. Much like other music 😀 I know when I listen to Bob Marley and the Wailers I’m instantly transported back to the bar on the sandy, sunny beach I first heard him at. Not live of course. *laughs* I’m a huge anime fan with tons of Japanese animation in the house. It almost rivals the book collection but the Laser disks are thick and the tapes have been put away and replaced with DVDs so they take up less space now *smiles*

Matt: I want to try and stay away from industry stuff, but I am still really interested in how and when you met your husband. Y’all (yeah, I’m from Texas) were sort of “pioneers” in an industry that is now HUGE. But you two were involved as “users.” Do you know where I’m going with this?

Judith: Where _are_ you going with this? *LAUGHS* You mean cybersex pioneers? Kind of suit up and get off? Afraid it was not so cybercool *giggles*

I have been online since 1986 when I took my first programming class and got access to the MUSIC system and through that (and raw telnet), the internet. I grew up and learned how to date online, to do the same, learn here. I learned how to be extroverted online as well. As such, when MUCKs and MUDs came around, friends from the old BBSes and related online net groupings introduced me to them. These were text-based virtual worlds where if you wanted anything, you had to code it. Lucky for me, I was good at begging code 😀 Dave and I met on FurryMUCK. I needed a place to live instead of constantly waking up under the bandstand robbed of stuff and clothes. We eventually got to know each other and over time (2 years) fell in love, met (which was the way to do it back then) and here I am in the UK where he lived and where my dad is from. The Adult Toy Depot has a ridiculous amount of sex toys that you can buy online so look there for the best selection. I stayed involved in IT got involved in search around late 1996 and haven’t looked back!

Matt: You said it…not me! I just knew you two met online (ahem… ) Thank goodness for the “vacancies” command, right?! And FurryMUCK, I would assume, also plays a role in the origination of your online persona, deCabbit, right?

Judith: Strangely enough, no. A cabbit is what Ryo-oh-ki is – a cross between a cat and a rabbit. Ryo-ohki changes from a cute and fluffy creature in to a big spaceship 😀 My husband calls me his little cabbit due to my tendency to bump in to things so when I needed a name to be known by in the SEO community (I have different IDs that go back to my MUCK days), I chose that.

Weirdly, everyone says they don’t see me as a cute and furry creature which makes me wonder what the heck I seem like! I mean, OK… I’ll give you I am not rabbit like but it’s the look that people give me with the assertion that the character doesn’t fit me that worries me. *LAUGHS*

Matt: I thought it was really cool of you to share some of these killer chocolates you had in Vegas with us. As I’ve come to realize, this isn’t a random or isolated incident…chocolate is a big player for you. (And I’m totally with you on that.) What’s your favorite form of chocolate? Or do you even have a favorite?

Judith: I do have a favourite! The Chocolate Society truffles – both milk chocolate and champagne.

The ChocBait chocolates were M&S Belgian truffles which I kind of stumbled upon (ha ha… get it? *snickers*) and traveled well. However ChocBait 3 was not a success at PubCon. Much like Star Trek films, the odd number ones don’t seem to work. I really enjoy good, high quality chocolate like Gorvett & Stone – they have a fantastic like of medal-winning chocolates. And did you know that there is a Chocolate Week in London? I occasionally eat Hotel Chocolat chocolate (peppermint creams and milk chocolate truffles) and I’ve enjoyed Paul A Young chocolates.

Matt: And I thought I was a chocolate connoisseur! I have to disagree with you on one point, though. ChocBait3 – PubCon – was not entirely unsuccessful. That’s how I met you. And although you might not have collected the tons of inbound links you were after, all the LinkWorthers in attendance were exceptionally grateful for the chocolates you were dishing out…YUM! So what’s next…ChocBait 5 The Final Frontier?

If it was a link building exercise it would have been a huge failure! No, it wasn’t a failure for the lack of links but for the lack of chocolate distributed. I left 3 boxes behind! It was fantastic to meet you guys though – tons of fun! I have yet to wear the t-shirt for a wet t-shirt contest but I’ll see about taking it to pole dancing for fitness classes. The pain those classes cause is extreme! I’m not sure what is next for chocbait. I suppose it will depend on whether work decides to send me to SMX Advanced or not. Also if we move from a Star Trek to a Star Wars analogy, it could be “ChocBait V – The Chocolate Strikes Back” I just want to say THANKS to Judith for being such a fun interview subject…I had a blast trading emails with her. Make sure you go read her stuff about SEO & SEM… Hope to see you again at PubCon this year and I’ll personally make sure you don’t leave there with any surplus chocolate!