It is All About Giving

As you can see here, Matt likes to help the homeless no matter where he is: 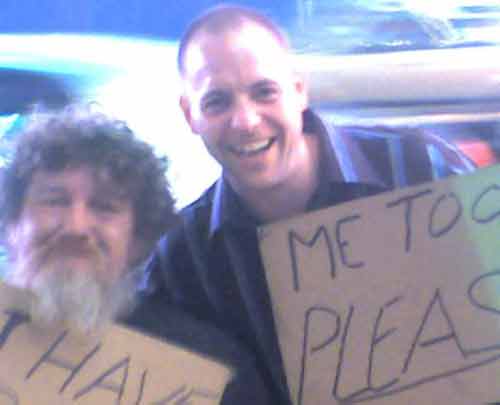 For those who use MyBlogLog, if you’ve logged in lately, you’ll see Yahoo has finally made it part of their whole login process. I also didn’t realize you could show so many visitors. Obviously I can’t show the entire thing due to the size of our blog, but here’s what I’m talking about:

Introducing the newest type of “casting”, or way to talk to your readers. No, not podcasting, sketchcasting. If you’re like me, putting thoughts to words by way of keyboard can be challenging. But if you give me a white board, I can talk/doodle my way through things much easier.

International yachting enthusiast, Patrick Gavin, has created Sketchcast.com. Create a free account, sketch away, then plug it in your blog like youtube allows you to. Let me warn you, there’s some time killing that can go on here. It is 2:32 in the morning and I jumped on my laptop around 9pm. Of course, I had a few beers hoping it would enhance my creativity and artistic ability. That always helped playing the guitar. . .not so much here.

It’s tough to not make it completely boring. More tools are needed. I put together a 20 minute recording and realized I spelled the damn name wrong at the very beginning and couldn’t edit it, and all the sudden it disappeared. A lot of the typed text never showed up But Kudos PG! A lot of opportunities I see with this thing already.

The whole sketching idea is the creation of Richard Ziade from arc90. I read where Richard gave Patrick the thumbs up to run with it and I just wonder what happens if sketchcast.com is offered a few billion from facebook?

Matt recently spoke of Google’s Jet, so I thought I would show everyone the LinkWorth Helicopter! Google has put $25-$30 Million into their jet and get to land it at the NASA airport, LinkWorth has put $35-$45 dollars into the “LinkCopter” (Our special name given to it).

The great part about LinkCopter is it uses no gas at all. Google jet? I’m sure there’s plenty of pollution they put into the sky. . .or shall I say spam. We can actually park LinkCopter inside our office and crashing in it is never life threatening. Repair is very cheap and we’re just happy to have it.

Just approving a new advertiser and this video made me have a good chuckle. I’ve had a rough time lately being sick so much, but this video made everything perfectly fine. Thank you

Thank you Mark! Thank you very much!

A couple weeks ago I heard about Tafiti, MSN’s new search/research project, but hadn’t had the time to really check it out until last night. Visually, I think it’s really cool…even a bit Vista-like. But from a functionality standpoint, I’m not sure I see anything all that ground-breaking about it.

That might not be very fair considering the limited amount of time I’ve spent using it. I’ll also admit that I haven’t put much creative thought into how I could apply this in the “real world,” but whatever.

In all honesty, I’m just happy to see that MSN is still out there duking it out in an attempt to regain some of their lost market-share in the search space. Ron mentioned in a previous post that he’d love nothing more than to see another engine compete with Google and I definitely share that opinion. I don’t know that Tafiti will be the one, but at least MSN hasn’t given up!

You’ll need to download Searchlight to use Tafiti (which you’ll be prompted to do immediately) and I’d recommend doing yourself a favor by reading through the FAQ before you take it for a spin. If you want to save information on the “shelf” you’ll also need to have an active LiveID.

I’d love to know what other people think about this and how they’re using it to their advantage.

Why Google Thinks They Own The Internet

Well, they don’t own the internet, but they pretty much own the whole online search arena. According to July searches by Nielsen//Netratings, combining Yahoo, MSN, AOL and Ask doesn’t even come close to Google numbers.

You can see the rest of the top 10 here. One thing I find interesting in these numbers is Ask.com. Do you think their decline has anything to do with their horrible advertising campaigns? Seems like they got rid of the “Algorithm” ads, but I wonder if people purposely stopped using them because of those stupid commercials.

I would love nothing more than to see a dark horse rise from the dust and own the search world but with a little less cockiness.

Has Anyone Ever Been This Creative

Everyone has creative juices flowing through their blood, some just have a little more than others. The guy in the picture above is one of the more creative people I’ve seen in a while. The fact we just bought a couple new laptops from Dell makes me feel like an idiot. Who knew I could have hooked up an old PC and made it mobile. He even has surround sound with a bass speaker behind his head!

Comparing the laptop below with the, umm, mobile PC above, I think I’m more interested in the one above. 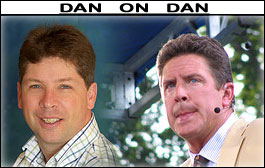 Today I was reading a blog Matt showed me where the blogger wrote how our friendly competition across the way is launching their own LinkInTxt program. While reading through the blog I came to a post about a copy cat site. Not only did someone get a hilarious domain name to poke fun at JohnChow, with JohnCow, but they actually put in some great work to it.

If you have a minute, skim through John Chow’s site, if you’ve never done so previously. Then go to John Cow and enjoy a good laugh. Big Applause to the creators of that site!