At 2:00 PM Central Standard Time (-6 GMT), Friday August 16th, we will be performing an upgrade to our control center. The expected downtime will be approximately one hour.

During this downtime, the only part that will not be functional is our control center. All ad feeds will be unaffected, along with the website, blog and forum.

If there are any changes, we will make an announcement as soon as possible.

Who Wants To Know About LinkInTxt

We haven’t announced much about our 2nd version of LinkInTxt. Obviously for a reason.

Our plan is stellar, but the execution of our plan has been a lot tougher than we expected. We do have the original version up and running so the in-text links are available. We’ll have a lot more time to apply toward the new product at the end of August. We apologize for the unexpected delays, but rest assured we are getting very close!

Time For Another Update – A Good One

We are excited to say our long overdue control center upgrade is finally here. As time gets closer, we’ll make an official downtime announcement for the upgrade.

We’ll have two parts of our upgrade and I wanted to throw a bone with an “at a glance” peek of what you might see.

First phase we’re calling NCCv1, will be out this week and here is a quick view: 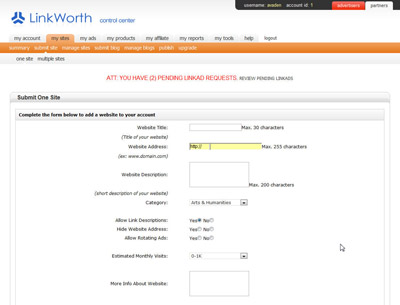 The second phase which has been labeled Dv2CC, does not have an exact completion date, but we’ll say before 2008. It might look a little like this: 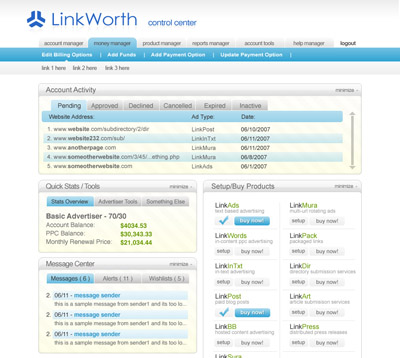 We hope everyone enjoys the new look and simplistic layout! 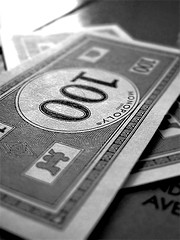 So Many Conferences, So Little Time

There is no doubt that our industry has plenty of conferences to attend. With so many to choose from now, how do you decide which shows are the right one’s to attend. While there are plenty of others, the most popular are:

Search Engine Strategies – the most well known.
Search Marketing Expo – new, but one of our favorites already.
Pubcon – another popular, mostly because it’s in Vegas.
Affiliate Summit – different crowd, but a great event.
Ad-Tech – geared towards the advertising and corporate crowd.

LinkWorth will be exhibiting for our first time at the SES San Jose in a few weeks. We’re pretty excited about it and glad to take the leap. The who’s who of search will be at the San Jose show and the big fun will be the Google Dance. Here is a good video of a previous SES San Jose show.

Matt and I will be in New York City for the SMX Mobile show, part because the SMX Seattle show was so good, part because it’s NYC and part because we’re ending the week with a bunch of friends coming up for a good weekend. The SMX show has taken conferences to the next level and it definitely caters to those who frequently attend search expos.

The most interesting story of all these conferences is WebmasterWorld Pubcon 2007. Our plans are to have a booth this year but the crew over at Pubcon is really dropping the ball. We’ve made several attempts to make our plans, but I’d have to say their lack of customer support is really beginning to make us feel otherwise. Take Vegas out of the equation and I wonder just how popular this show would be. Bottom line though, it is in Vegas and it is a great time.

Update:
Seems we already signed up to Pubcon! Those guys responded today and said we were the first signed up back in May. Woops. I will change the lack of support to my lack of memory!

Want to Earn A Little More With LinkWorth?

I slipped this little secret out today on a blogger’s site and figured I would post it on our blog to be fair. We buy a lot of ads for our managed accounts each month and there is an ordered process we follow, which is searching for similar themed sites and preferred partners. We’ve experienced a huge growth in partners the past couple of months and it helps if our staff is familiar with your site. “How can this be done” you ask?

Help us create a buzz about LinkWorth! We have alerts for our name and as soon as they show up, everyone up here reads them. As our staff read these glowing write ups, they make note of the website url. Then as they’re buying for clients, the process is something like this: search for same themed preferred partners, search for partners who have written about us. This isn’t anything we’ve put in place internally, it’s just how we have noticed our account managers spending money lately.

In summary, here are a few things you can do to catch the eye’s of advertisers (and our staff)

Put the Muscle Into Your Link Building 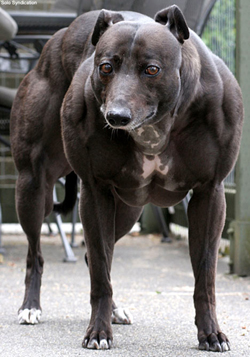 While there is not one single blueprint for the perfect search engine marketing or search engine optimization campaign, one thing is for certain, link building is an integral part of it. You can optimize until you are blue in the face but anything competitive and there’s not much of a chance to rank well.

For this reason, putting muscle into your link building campaign can make all of your optimization efforts worth it. The links not only help build link popularity, but they also help build a buzz and visibility for those who might not have heard of your site or service.

Just checking in from sunny Miami on our last day of the Affiliate Summit. It’s been a great trip so far and we learned a lot from this conference in how we want to restructure our own affiliate program. We listened to several super affiliates in how they view affiliate programs and how they like to see them setup to make it attractive. It was close to what our original ideas were, but definitely more input and ideas to add to our restructuring. If you’re a current affiliate or just plan to be an affiliate in the near future, keep a lookout for our new program. There will be commissions paid on both advertiser and partner referrals. We’re also going to make it as lucrative as possible.

Also along the way we flew through D.C. to see our boy Juan “The Colombian Crusher” Gallego get married off. The wedding was great, the families were great, the hospitality was more than it should have been and most importantly, the bride and groom looked awesome! A HUGE congrats to our developer Juan and his lovely wife Julianna on their marriage. Now if we can just get them back to Dallas!

Tonight, our last night in Miami, we’re headed to Dolphin Stadium to see The Police. We picked up the tickets last minute and somehow scored some really good seats. I’ll chime back in and let you know how the show went. Until next time.

Having the Right Words

Being a good blogger requires having all the right words. Personally, I often have a hard time putting the right words together and saying it like it is. If there was an award for typos, I’d win hands downd! (I purposely did that by the way) Sometimes when you want to describe your own product and/or service, you can be so married to it, words just do not give enough justice. You might have the sensation of drawing it out on the whiteboard or creating a Photoshop image that will better tell the story. Of course, I have never done this because I don’t have a whiteboard or Photoshop. . .

My point is sometimes allowing another person review your own products and/or services with an unbiased review can help put things into perspective. Rob StGeorge at TextLinkBuzz threw up a great review of LinkWorth and “all” of our products. Most people put us into the class of “link broker” but we are a jack of all trades. We compete not only with Text Link Ads, but also with Intellitxt & Kontera and the many other companies that do article submissions and press releases, not to mention SEO consulting.

Thanks for the kind words Rob!

Have A Testimonial About LinkWorth?

How has LinkWorth helped you? We want to hear from all of our customers by way of a testimonial. If you’ve noticed on our home page, in the bottom right corner, we feature a testimonial with each page view. We would love include your comments about LinkWorth too, so if you have something to say, please say it!